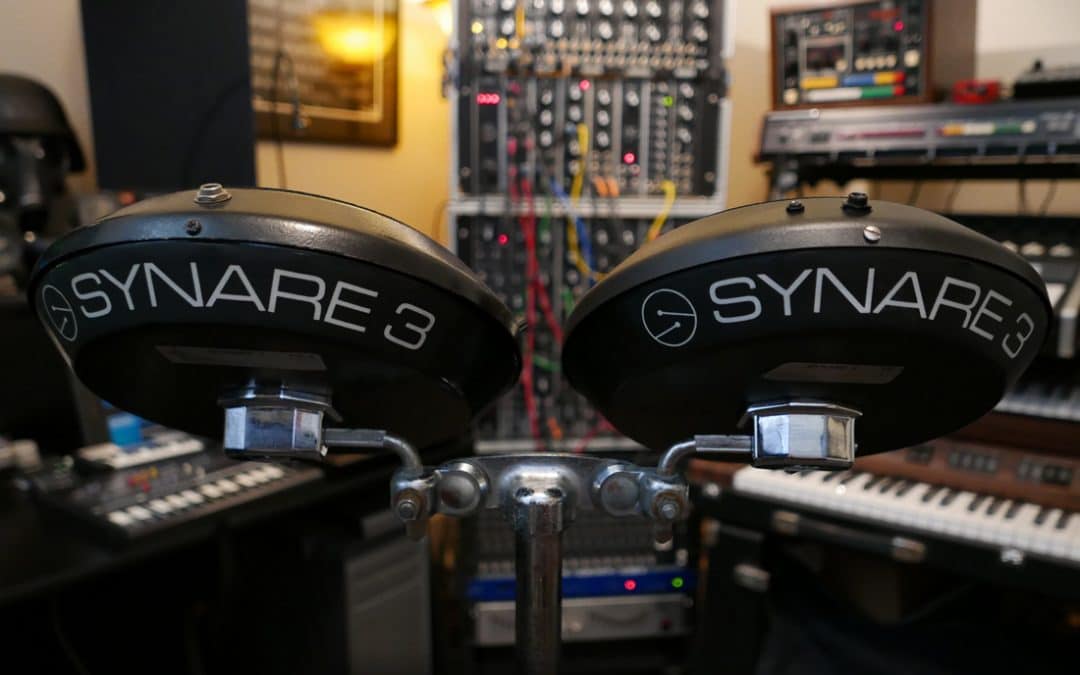 One of the signature sounds of 80’s electronic pop music came from synths that you hit with a stick – Drum pads.

Drum machines. They revolutionised pop music back in the ’80’s. The sound of the drum machines made by Roland, Linn, E-mu and Oberheim along with the multitude of other manufacturers are an important part of the foundation of pop and electronic music to this day.

Drum machines have an often forgotten cousin – The drum pad. Perhaps the genesis of these instruments were the home made pads that were used by Kraftwerk during their live shows. No doubt this would have been the first time that most people saw a musician on stage hitting pads with sticks to trigger synthesized sounds. they have been around ever since, many companies have made their own version and and they each have their own interesting story in the annals of pop, disco, funk and electropop.  Lets take a look at one of them – The Star Instruments Synare 3. 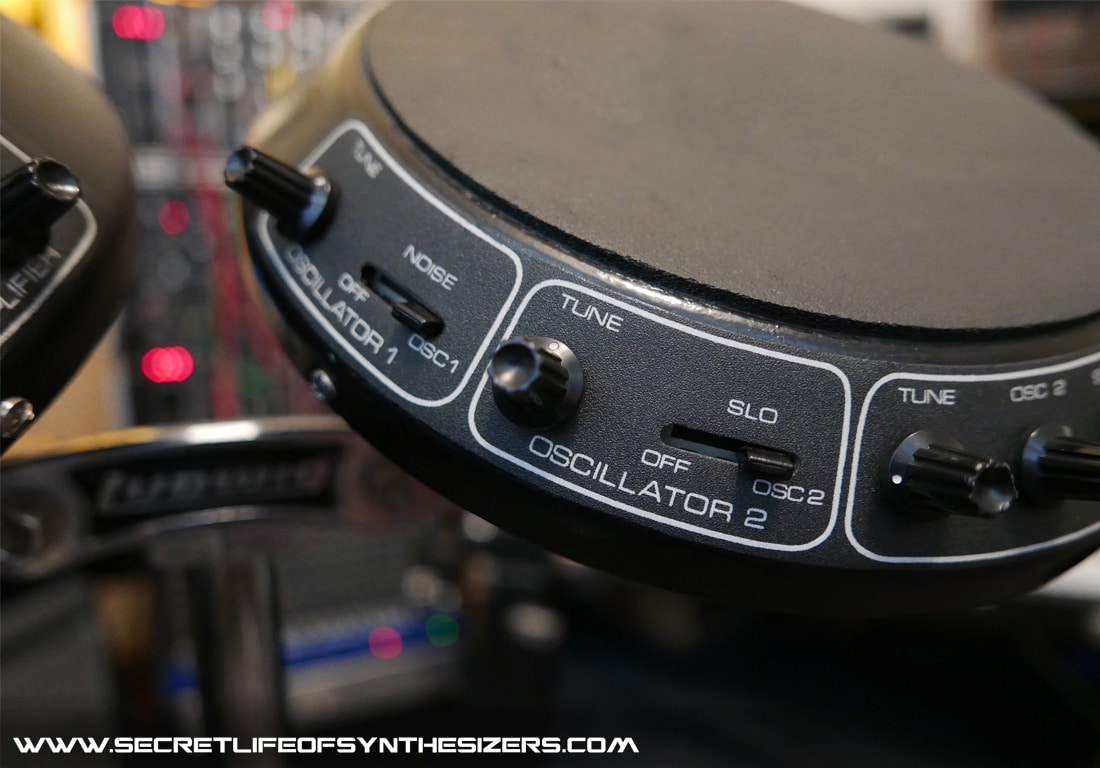 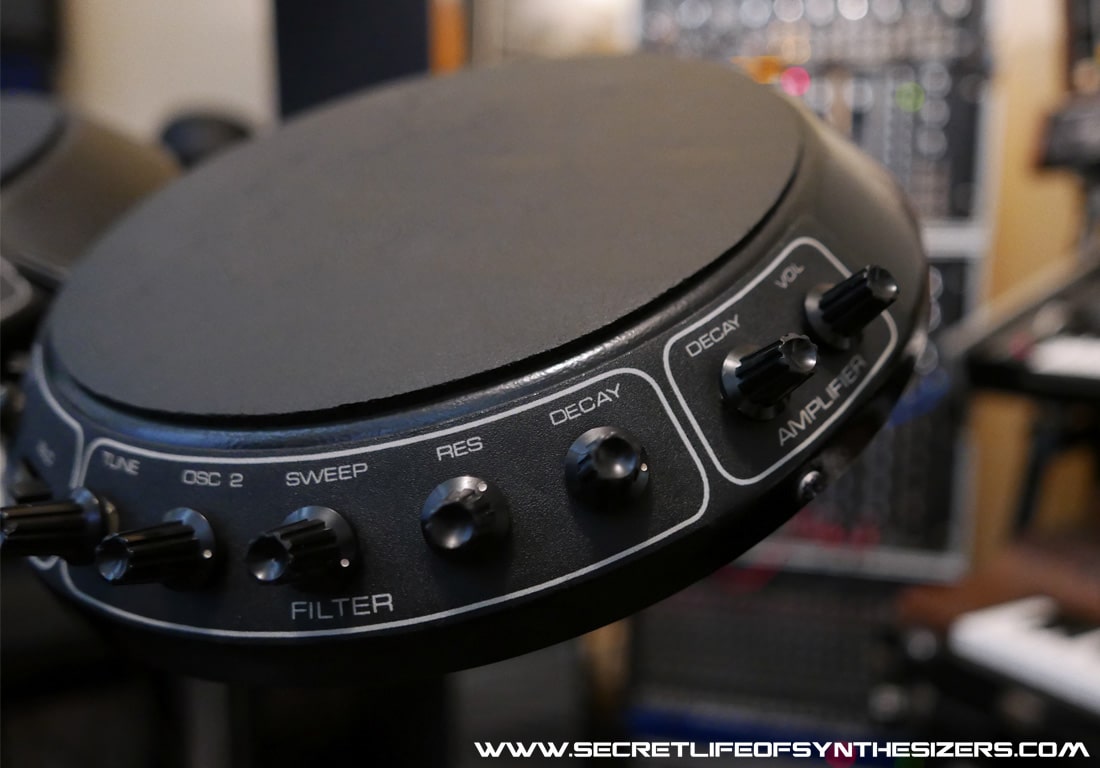 Life as a drum pad was a dangerous occupation. Apart from the obvious wear and tear to the pad surface by being hit hard with a wooden stick and the repeated shocks and vibration that had to be endured by the casing and the electronics inside was the ever imminent risk of having it’s pots and switches smashed off spectacularly during a performance. Simmons pads that were clamped onto the frames of conventional drum kits and used in rock concerts sometime reached the end of a long tour looking like they had spent time in a tumble dryer. As you can imagine from looking at the images of the Synare a miss with a drumstick during a show could see a knob with a broken pot shaft inside flying off across the stage. If you look at live film clips from Gary Numan and Devo you can see that they set up their Synares with the controls facing away from the drummer to prevent such mishaps.

The Synare 3 is a well built drum pad, it’s in a good, solid case and the control layout is very friendly. It was made in The USA by Star Instruments Inc. from 1977 to around 1982. It has a broad sound capability with two oscillators, a noise generator and a resonant lowpass filter. Using combinations of the oscillators and the noise generator  and filter it can produce hand clap sounds and snare drum tones as well as tom like sounds and using the filter as a sine wave oscillator creates the classic disco dive tom sound. With LFO 2 having a range switch that drops the pitch by a factor of 20 it can produce LFO effects as well.

It was used in many, many songs – The crack sounds in Gary Numan’s Cars, Joy Division’s She’s Lost Control, Devo’s Whip It, Kim Carnes’ Betty Davis Eyes and The Cars’ Let’s Go are a few examples. Ultravox’s Vienna uses the Synare for several different sounds throughout the piece. 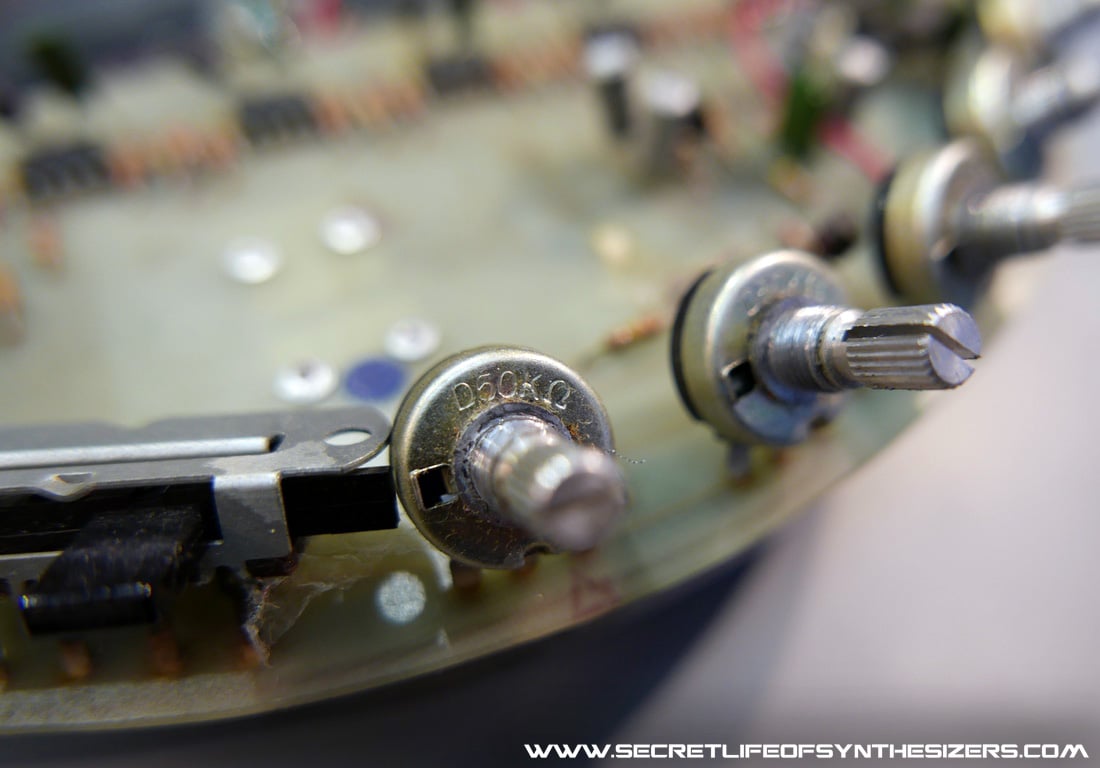 The pots and switches 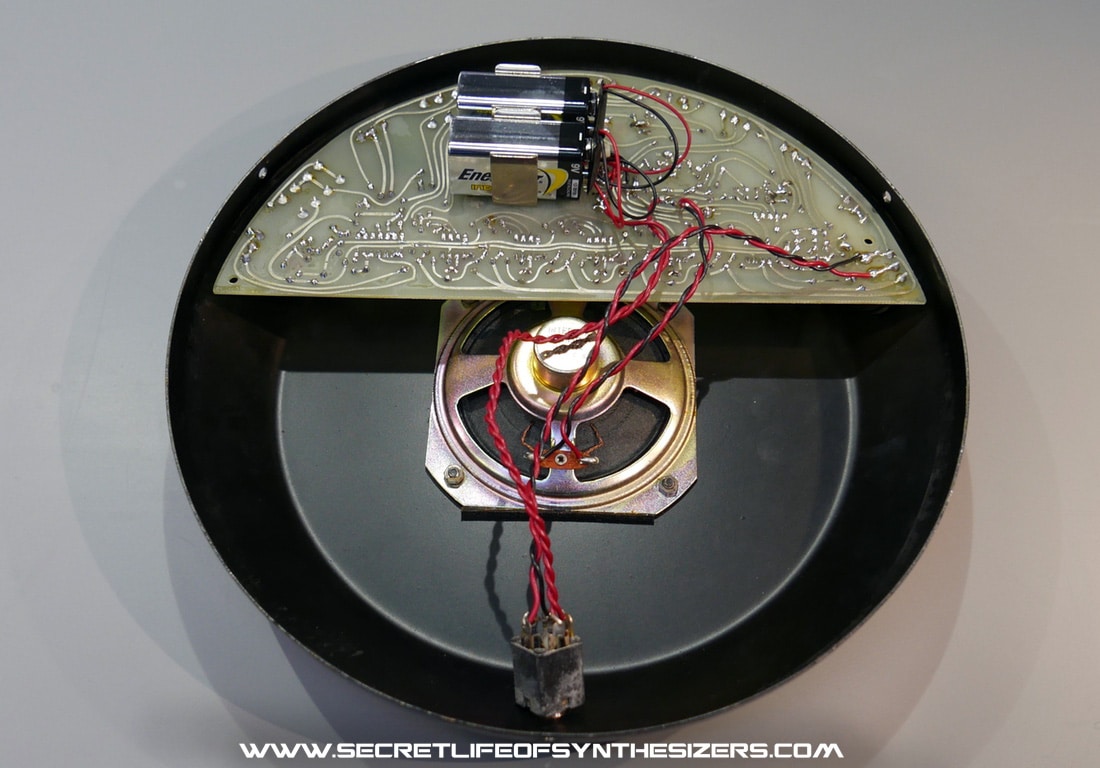 The speaker is actually a microphone

The Synare has some interesting design features. The little speaker that you can see in the photo is not used as a speaker, it is actually used as the sensor to detect the pad strikes. The speaker is wired in reverse as a microphone, the voltage proceed by the speaker coil when the pad is hit is boosted by a transistor amplifier. The boosted impulse from the speaker then goes off to the envelope generators to trigger the sound output. And here is where the circuitry takes an unusual turn – The impulse also goes to a circuit that keeps the batteries disconnected from the Synare’s circuits to save power. Each time the pad is hit the circuit connects the batteries for 10-15 seconds. If the pad is not hit the battery is disconnected after that time. 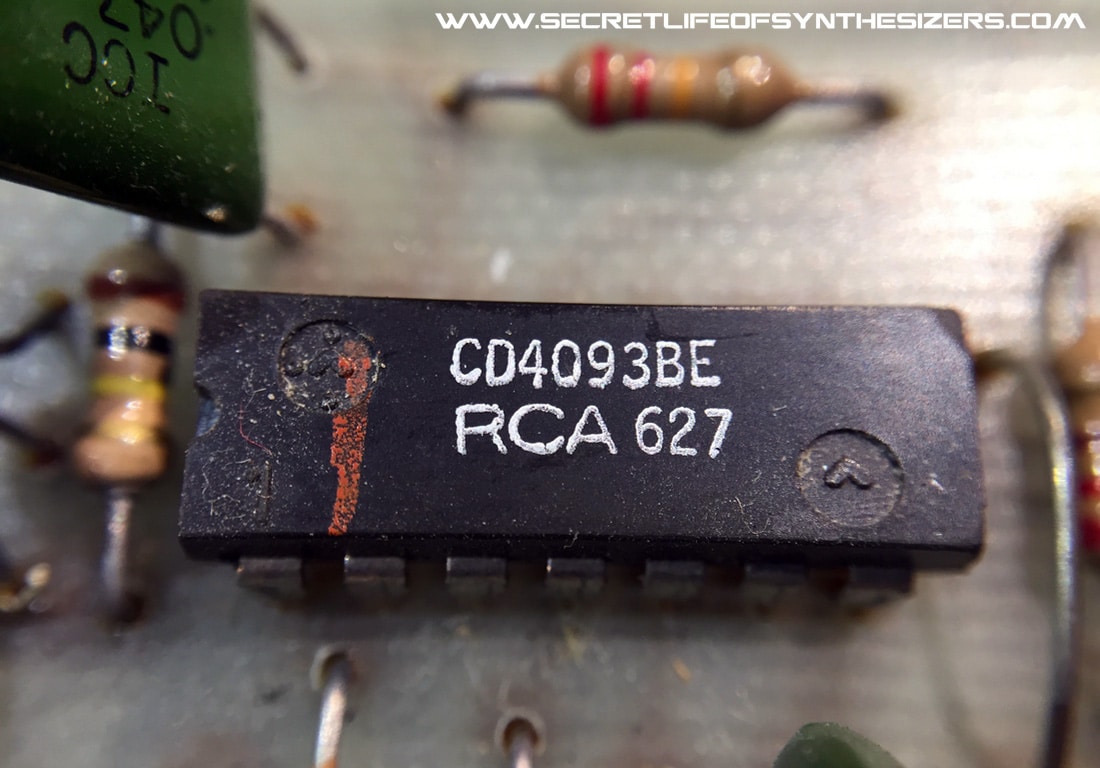 The rest of the circuitry is straightforward: The noise generator is a simply a transistor junction’s natural noise amplified greatly, the oscillators are based on a 4093 CMOS IC containing two NAND gates with Schmidt triggers. Oscillator 1 has a square wave output  with a range of 40-1500 Hz. Oscillator 2 is range switchable downwards and also has a triangle output available. An interesting factor is that according to the manufacturer only an RCA manufactured 4093 will work in the circuit. 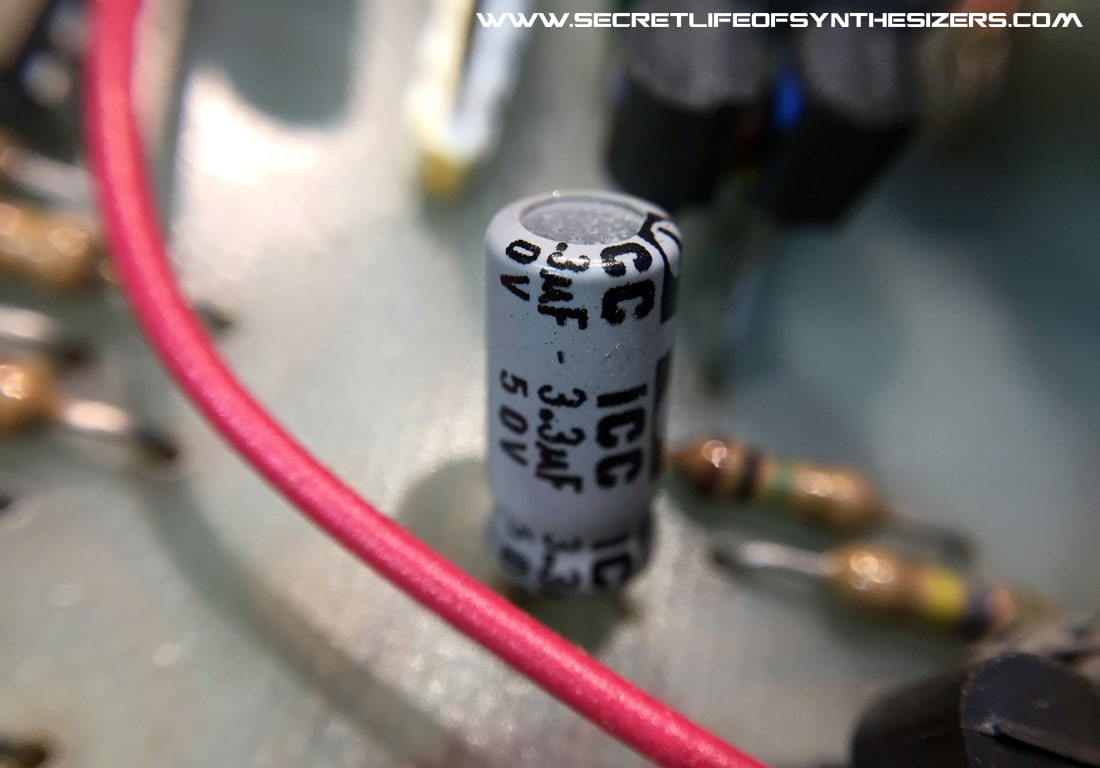 An electrolytic capacitor, probably due for replacement 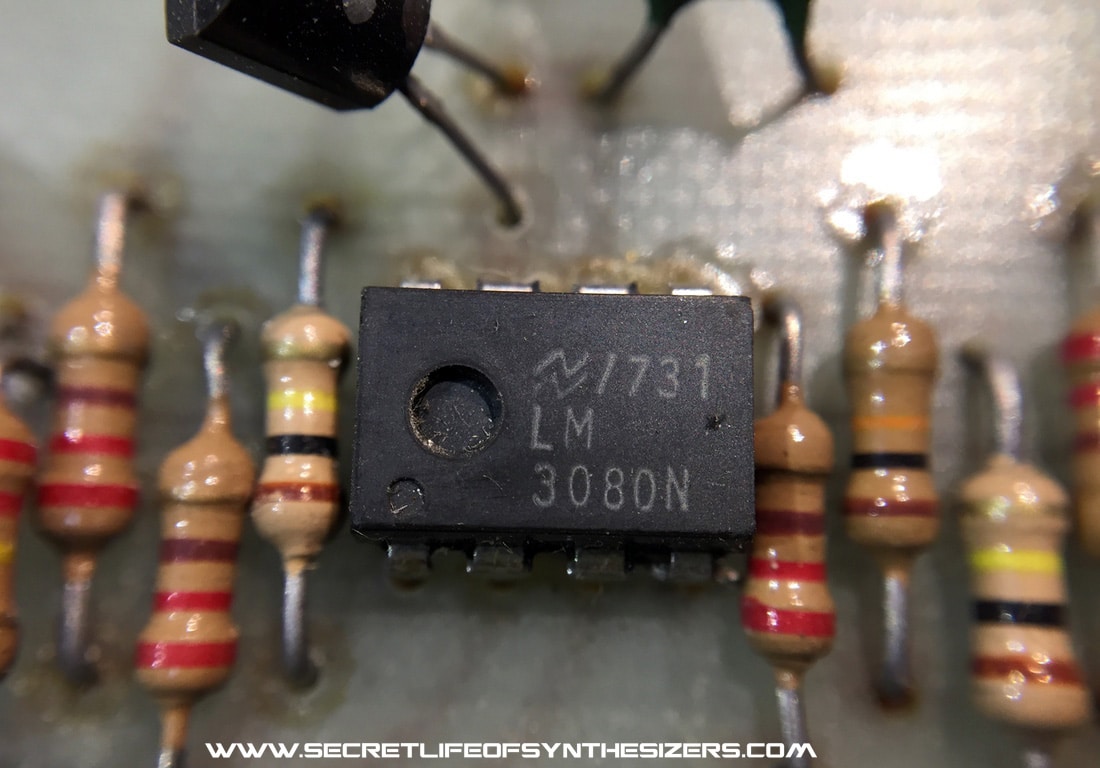 The filter is a conventional OTA chip type filter. It is a four pole, 24dB/octave voltage controlled lowpass filter, each pole using an LM3080 op-amp. The output of the filter’s fourth stage is fed back into the beginning of the filter via the resonance pot. The filter can be driven into full oscillation with the resonance pot so as to turn the filter into a sine wave oscillator which is useful for creating the classic disco dive sound effect. 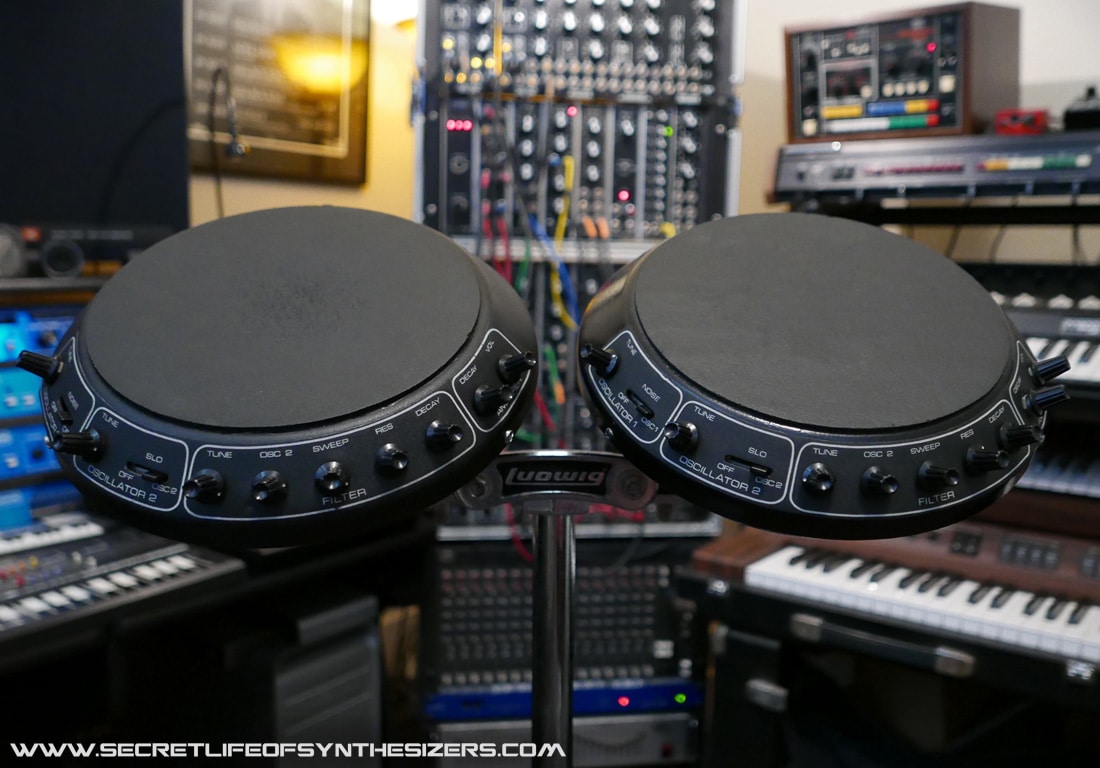 Pads like the Synare with their analog tone generation are more of an oddity now, they have been replaced by high tech electronic drum kits that connect to digital sound generators that can mimic an acoustic kit. With pads that are velocity and zone sensitive, a drummer can have an entire electronic kit setup that allows them to practice almost silently using headphones and allows them to also select from a massive library of different sounds that they can assign to their virtual kit. That said the Synare is great fun, particularly if you play live so if you come across one at the right price it is definitely worth considering.

There isn’t all that much to go wrong with them if the are in sound physical and cosmetic condition, The electrolytic capacitors may be due for a change and the 4093 VCO IC could need a bit of experimenting with to find a suitable replacement if it failed. RCA CMOS IC’s are known to have a limited lifespan so this would be the most likely source of a fault with the Synare.