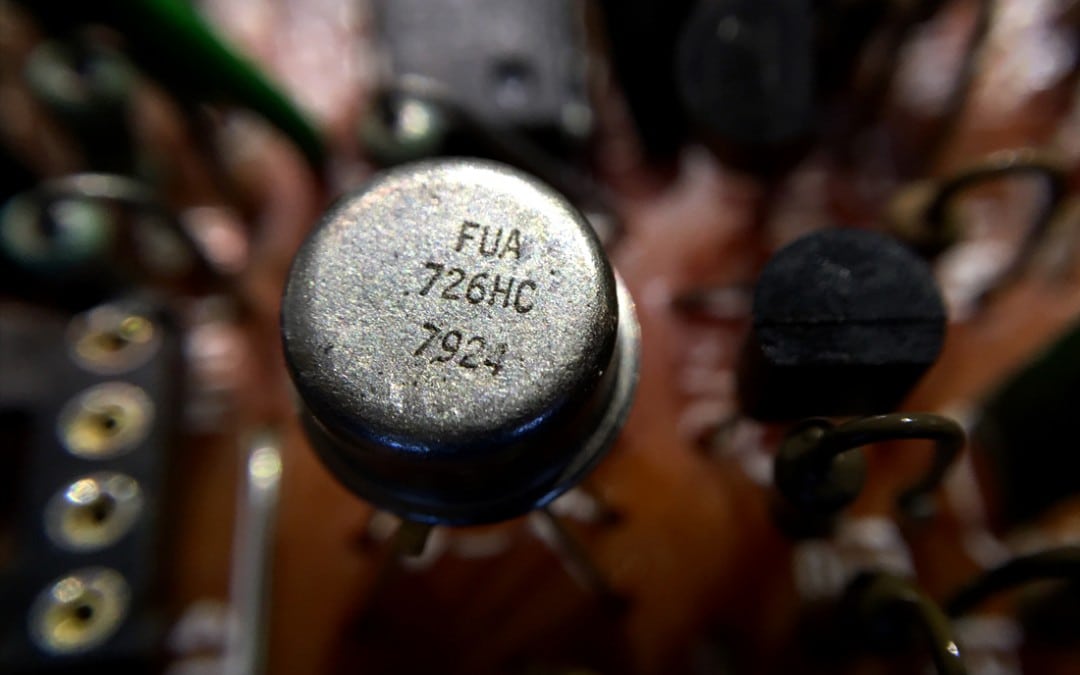 The oscillator is the beating heart of a synthesizer, it is the humming bird that generates the raw musical tone that then leaves on a journey through the rest of the synthesizer‘s circuits and modules to create the final sound. It’s job is not inconsiderable, it would have been a far simpler matter for designers like Ikutaro Kakehashi, Robert Moog, Alan Pearlman and David Cockerell  to build their instruments if not for one particular engineering hurdle that would dog them throughout their careers.

An analog musical oscillator is a capricious creature. It is much easier to build an oscillator for almost any other purpose than a music synthesizer. It is expected to operate over a range of up to 8 or more octaves at relatively low (audio) frequencies and it has to be able to stay in tune precisely across this range to play a chromatic scale closely enough to satisfy the very pitch sensitive nature of the human ear. This was no small engineering feat using 1970’s analog electronics. Because a synth VCO has to cover such a large frequency range it cannot be natural resonant oscillator based on a crystal like those found in radio circuits, it is generally a relaxation type oscillator who’s frequency must be driven by a precisely controlled current that is derived from a control voltage from a keyboard. And as though that wasn’t enough of a design challenge there was another problem to deal with – temperature.

Electronics are very sensitive to temperature. Much like a guitar or piano string they will go out of tune when the ambient temperature changes. When you pass a current through electronic components physics demands that they heat up. This characteristic must have given designers sleepless nights and there were many solutions invented to deal with the issue, some better than others. Tuning problems have become folklore around instruments like the Yamaha CS-80 and the original modular synthesisers from the 1970’s. Using synths in clubs where the temperature climbed during the show was always tricky for keyboard players. The one good thing that comes from this instability is that the rich sound of old synths is partly due to the subtle detuning between the VCO’s on the same voice of the instrument. Lets take a look around inside some famous synths at their VCO’s. As always, click on the images for a closer view. 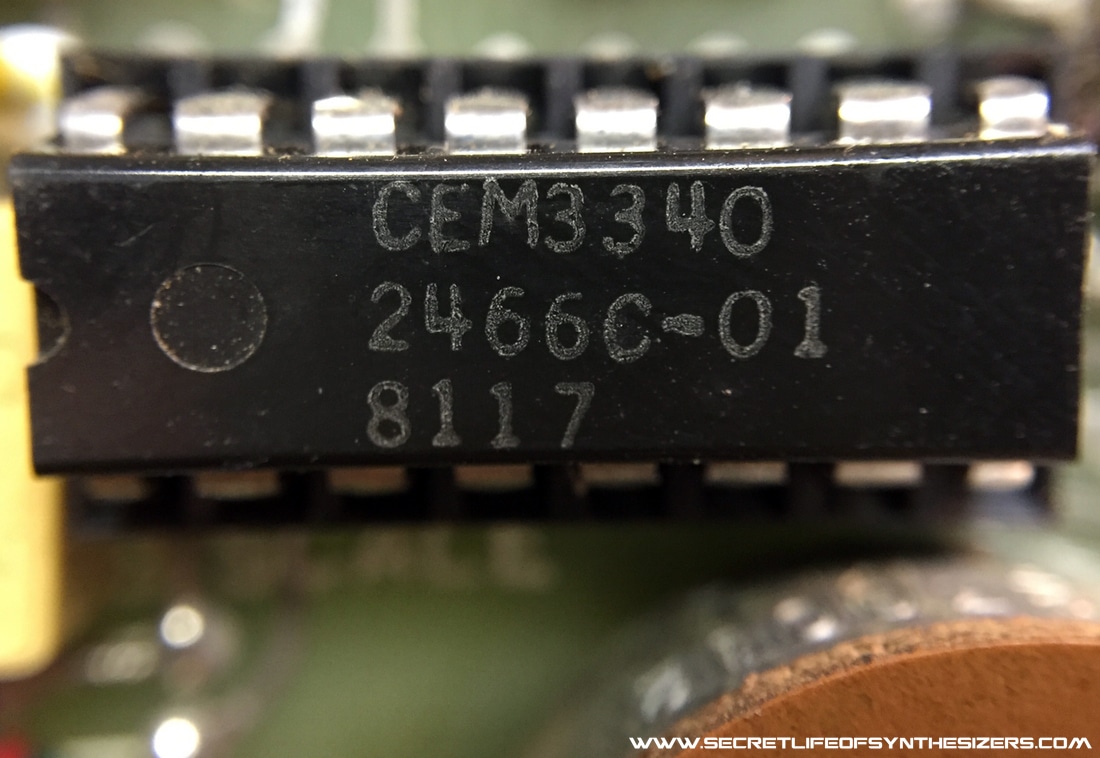 The fabled “Curtis oscillator” – the CEM 3340 precision VCO chip. The ones pictured above are inside a Sequential Pro-1 and an OB-xa. The 3340 “oscillator on a chip” allowed synth designers to build instruments with stable oscillators that were compact and far more affordable. Having most of the VCO circuitry within a single IC helped tremendously with temperature stability and consistency of waveform timbre which is critical in poly synths such as the Prophet 5, Oberheim OBxa and Memorymoog to keep close sonic matching between voices. Along with the ground breaking SSM 2030 VCO chip they allowed VCO’s to become small enough to make polyphonic analog synthesizers commercially practical.

The 3340 produces sawtooth, triangle, square and adjustable pulse waveforms, it can be hard or soft synced and can accept both linear and exponential control voltages. It only requires a few external components to create a stable and sophisticated synth VCO. It also replaces the wave shaper circuitry that  other synths need after their purely sawtooth VCO’s to create triangle and pulse waveforms. This remarkable and versatile IC has been re-released in 2016 which is a real blessing for vintage synth owners and no doubt there will be many new designs created in the future using this classic chip.

The advent of micro computers in polyphonic synthesisers that finally allowed patch storage functionality was a real breakthrough for performing musicians. These computer systems also revolutionised synths like the Jupiter 8, Prophet 5 and OB-Xa by providing an auto-tune button which quickly pulls all of the VCO’s into tune. It was definitely not a button that you would want to accidentally hit during a live concert as the synth is disabled for up to 10 seconds while the computer builds a tuning table for each of the machines VCO’s. If the synth drifted out of tune during a show the player could completely re-tune the machine in the space between two songs. It was a game changer.

The CEM 3340 was used in synths by many companies including Roland, Moog, Oberheim, Doepfer, Crumar, Octave-Plateau, Sequential and Steiner-Parker. 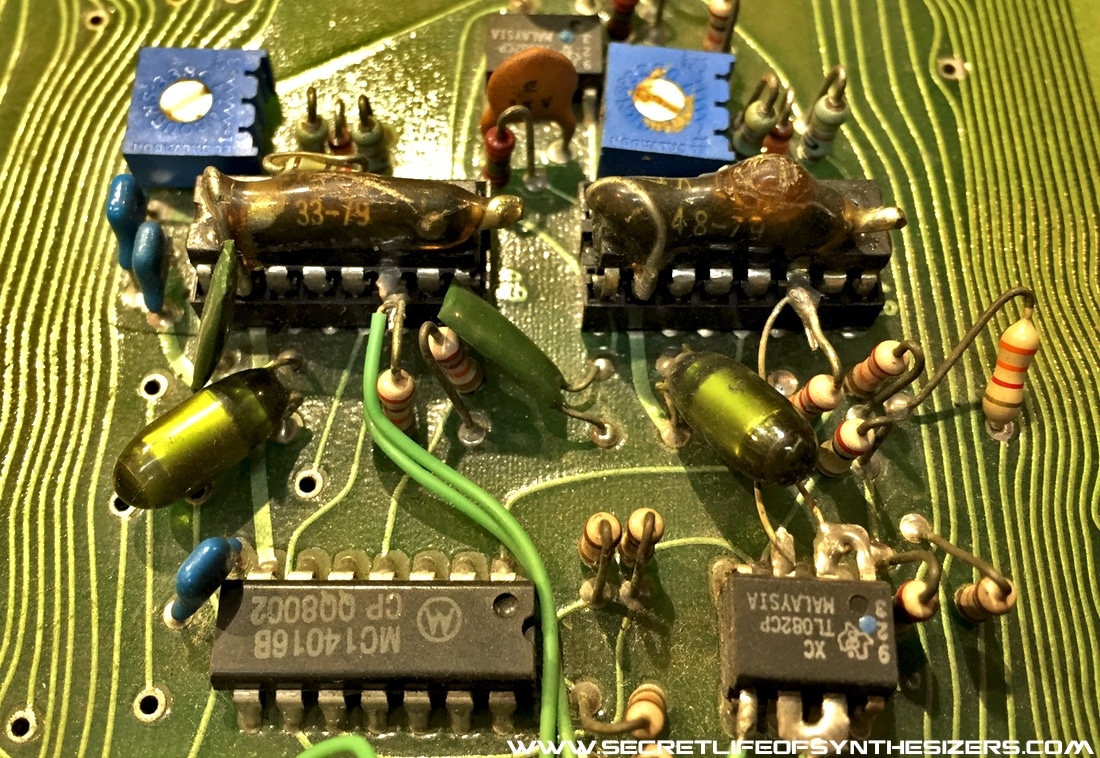 A closer look at the Prophet 5 VCO

Solid State Music Technology was another company making innovative IC’s for electronic music. SSM chips were used in the earlier revision 1 and 2 Prophet 5 synthesizers before the move by Sequential to Curtis chips in the final version of the Prophet, the revision 3 machines. The SSM 2030 VCO IC’s in the photos are inside a revision 2 Prophet and have tempco (temperature compensation) resistors glued to the top of each oscillator IC in an attempt to improve tuning stability. They were also used in some Aries and early E-mu modulars. 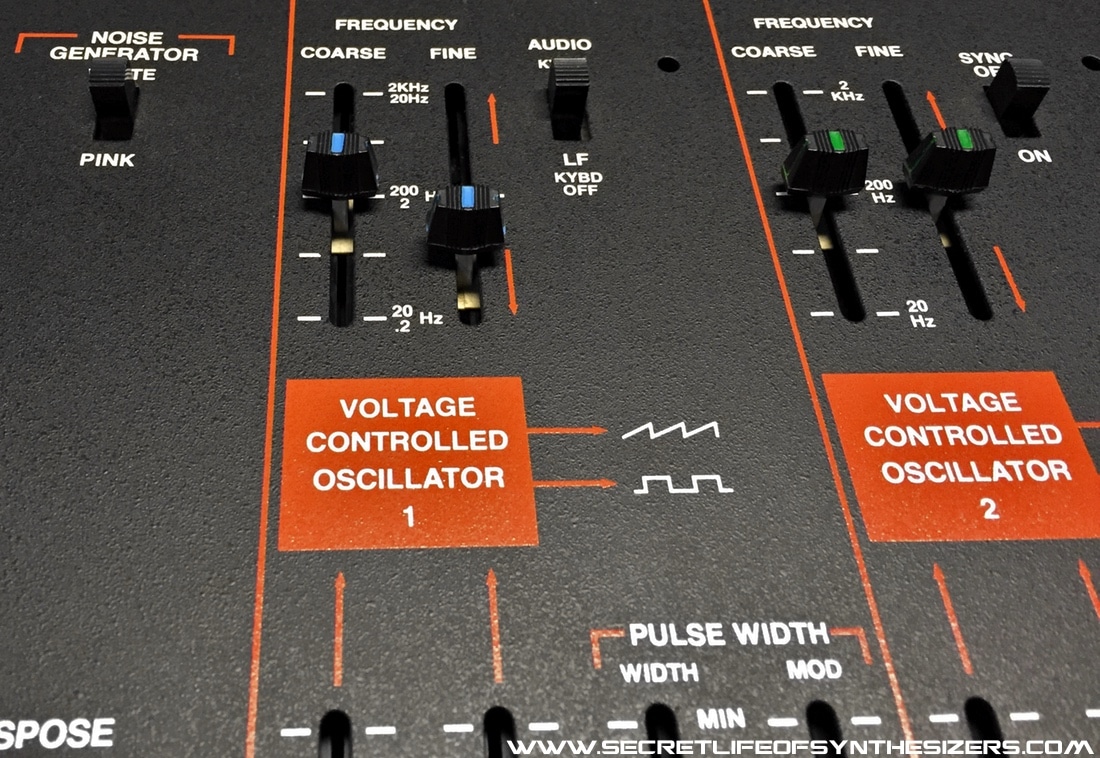 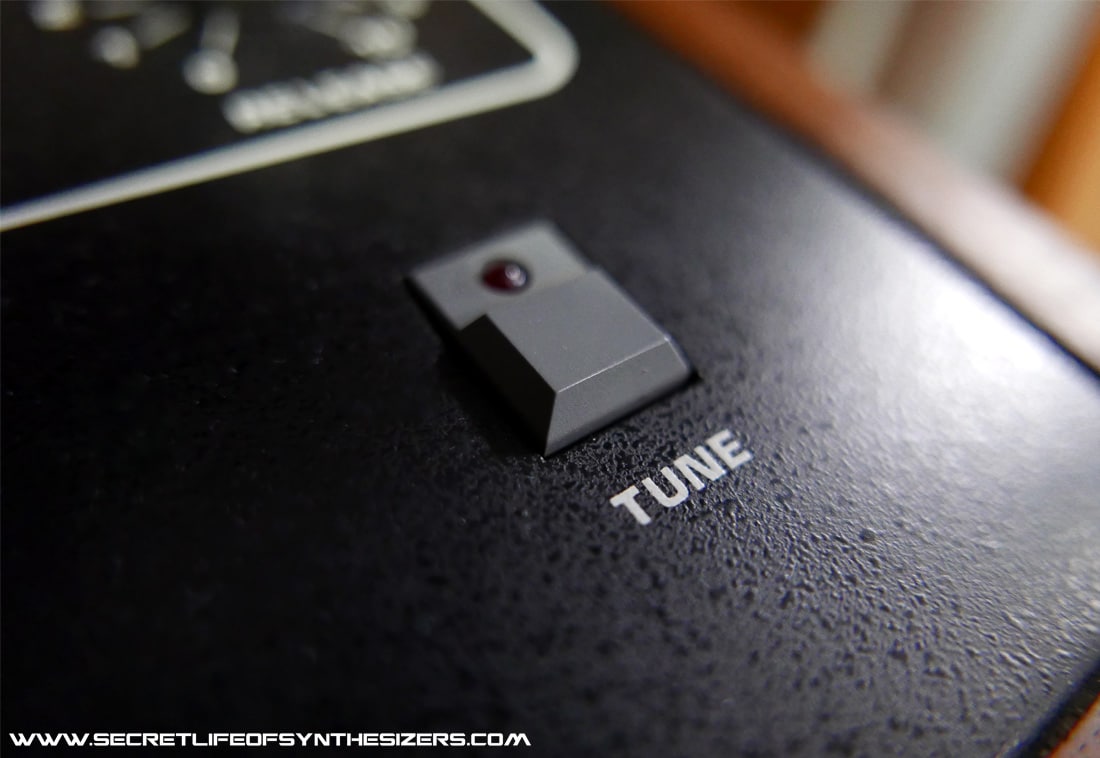 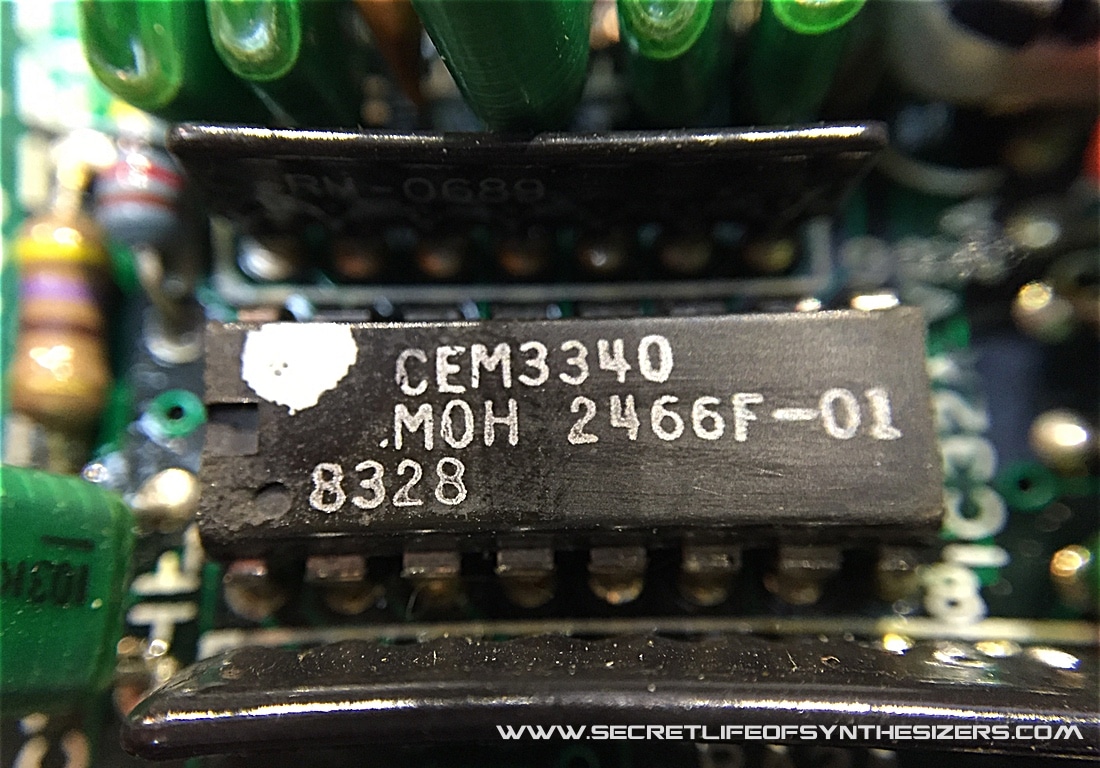 When Yamaha designed their CS series of synthesizers they also followed the path of custom IC’s. This was something of a hallmark of Yamaha, they designed many Yamaha branded IC’s in the 70’s and 80’s, they even periodically produced printed volumes called “IC Guide book Audio” to compliment their prolific IC range. The CS series VCO’s were manufactured by Mitsubishi, presumably from a Yamaha design. Lets’s take a look at the VCO’s from a CS series polysynth.

Looking at the images we can see the IG00153 VCO IC with a pink sticker on the left hand side and a diode stuck to the top of the chip with a blob of white thermal compound. The diode was a later modification released in Yamaha service note E-46, the description reading: “We hereby announce that the undermentioned modifications have been made to stabilize pitch in the Polyphonic Synthesizer”. The little sticker reads “63”. This is the chip’s “ranking” according to Yamaha. Ranking is a term borrowed from pipe organ design. In essence Yamaha tested all of these VCO chips at the factory and awarded each a ranking according to how their pitch varied with temperature. The ranking was then written on each IC and each CS series polysynth had to have it’s VCO chips selected so as to be no more than two ranking numbers from one another throughout the machine’s voice cards. 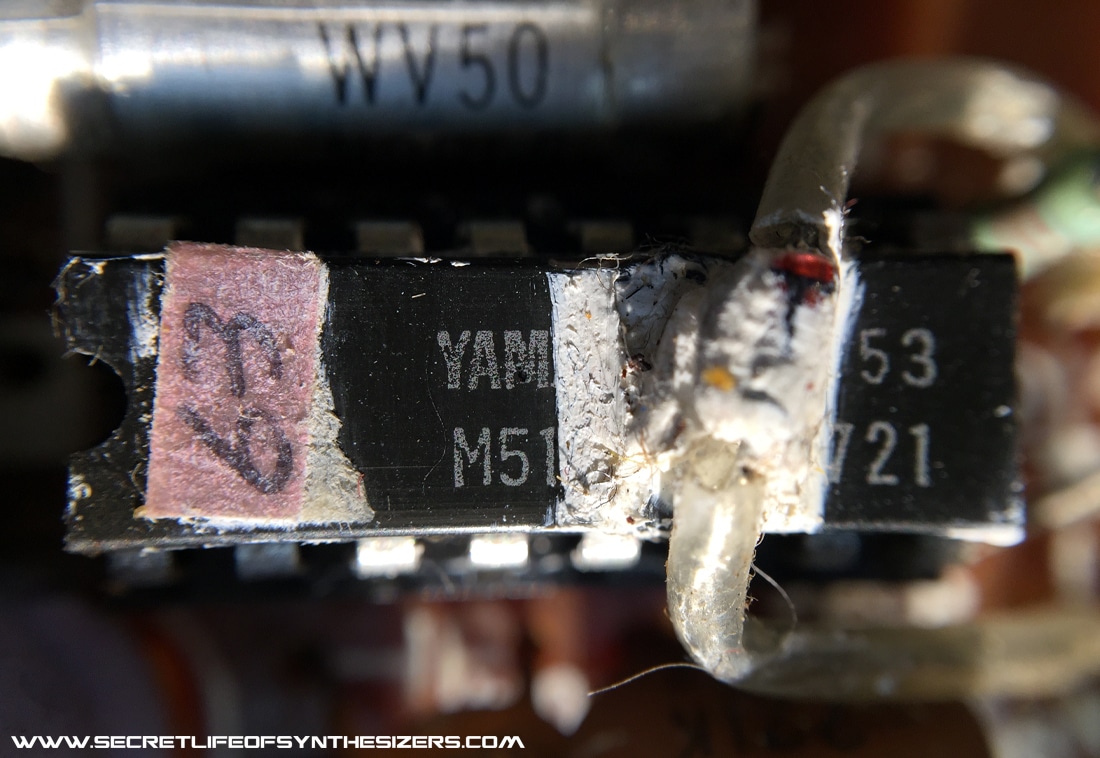 The CS series VCO is a sawtooth core oscillator which is the most common variety of VCO. One oddity of this particular VCO is that it isn’t a perfect sawtooth, it has a small square pulse at the start of each cycle. Above the IC you can see a silver cylinder – a polystyrene capacitor, it’s the VCO’s integrating capacitor, effectively the electrical “bucket” that fills with voltage until it reaches a certain capacity at which time a transistor short circuits the capacitor, dumping out the voltage and the filling begins again, creating the next cycle of the sawtooth waveform. Yamaha uses a linear CV standard (Hz/Volt) as do Korg who reportedly invented and patented this CV system. Most other synths use a logarithmic system known as “Volt/octave”.

The CS-80 shares it’s voice cards with the smaller CS-60 and CS-50, the boards are the same apart from five resistors and three trim pots specific to each model. The main VCO is referred to as VCO III in the Yamaha literature. There are two other oscillator IC types in the CS synths, the IG00150 used in the ring modulator, the tremolo and the sub oscillator, this is referred to as a VCO II type, and there is a BA617 clock oscillator chip to drive the chorus IC’s.

Pictured below is the oscillator board from the Roland SH-5 monophonic synthesiser. Compare this board with the tiny Curtis Electro Music 3340 oscillator IC. Note the silver “metal can” type integrated circuits which were the predecessor of the modern black “dual inline” chip case as used in the CEM3340. In the image showing the SH-5 VCO board you can see the rare Fairchild 726 transistor pair IC (the metal can IC on the left of the image towards the centre) – This chip contains the  transistor array that helps convert the control voltage from the synth’s keyboard into the logarithmic current that the VCO core needs in order to be able to play a musical scale. This chip is notable in that it is internally heated in order to take control of it’s own temperature to reduce drift caused by variations in ambient temperature. 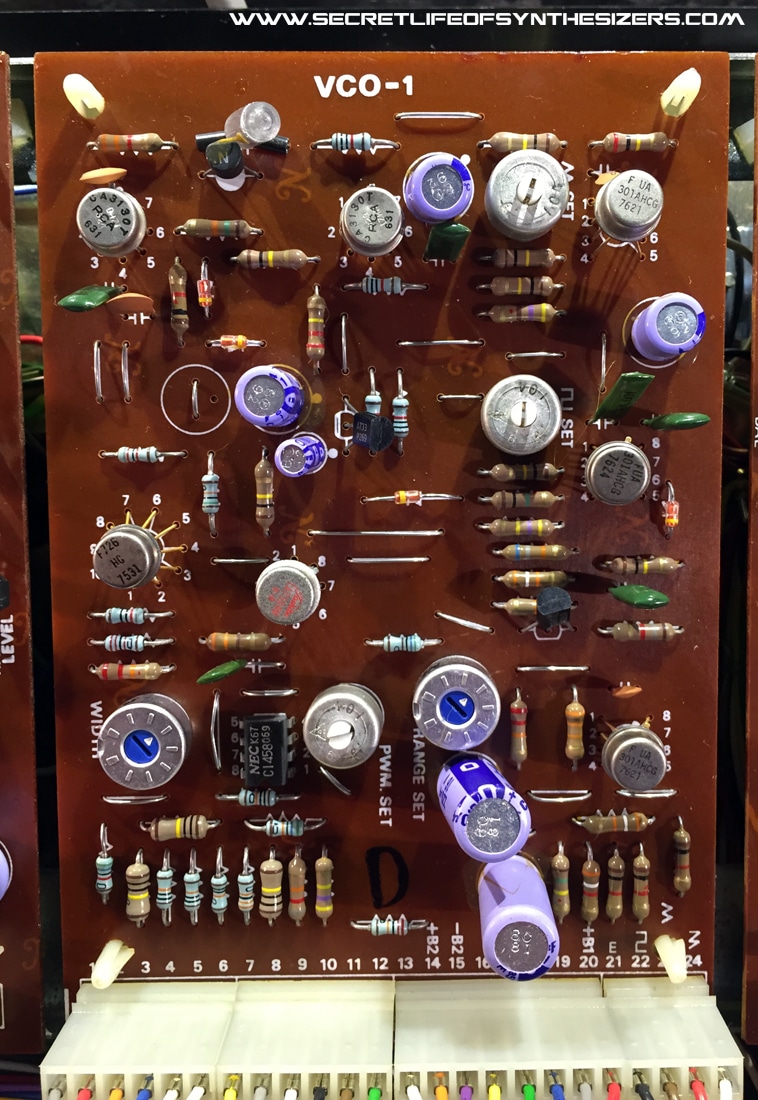 VCO board inside a Roland SH-5

Keeping it all in tune – Transistor arrays

In order for a VCO to track pitch the oscillator core usually needs to be driven precisely by an exponential converter circuit. This circuit provides a precise current that causes the VCO to ideally double in pitch each for each volt that is applied to the input from the keyboard. The advantage of this system is that you can have many octaves of range with a relatively small control voltage from the keyboard – an 8 octave keyboard only needs 8 Volts to cover it’s range. The disadvantage of this system is that it is very temperature sensitive. The linear system that was used by Korg and Yamaha were less temperature sensitive and had no exponential converter but as the control voltage doubled for each octave you could not have a large keyboard range, the control voltage became so high that the power supply simply could not provide enough voltage to add more octaves.

Other problems with a linear CV system is that adding vibrato across the keyboard or adding the CV’s from a keyboard and a sequencer together are complex and problematic. In contrast on a Volt/octave system these things are simple.

To keep these exponential converters stable required pairs of transistors that were closely matched and thermally joined. The best way to do this was to use transistors that were manufactured together in a chip as they could be closely matched and thermally coupled. Some of these chips were internally heated in an attempt to control the temperature. Below are a few examples.

The UA726 heated transistor pair is used in some of the most famous vintage mono synths. It has an internal heater and it can get hot indeed – the military version of the chip can operate up to 125 degrees Celsius. It has internal temperature regulation and a pin for setting the temperature. It can be found inside the Roland System 700, SH-2, SH-5 and SH-7 and the Jupiter 4 among others. It is the round metal can device in the pictures below. Rare and tricky to find, beware of counterfeits on Ebay.

In the other images you can see the CA3046 array in an original Minimoog Model D and a modern MAT04 array that Dr Robert Moog chose for the VCO’s inside a modern classic – the Minimoog Voyager. 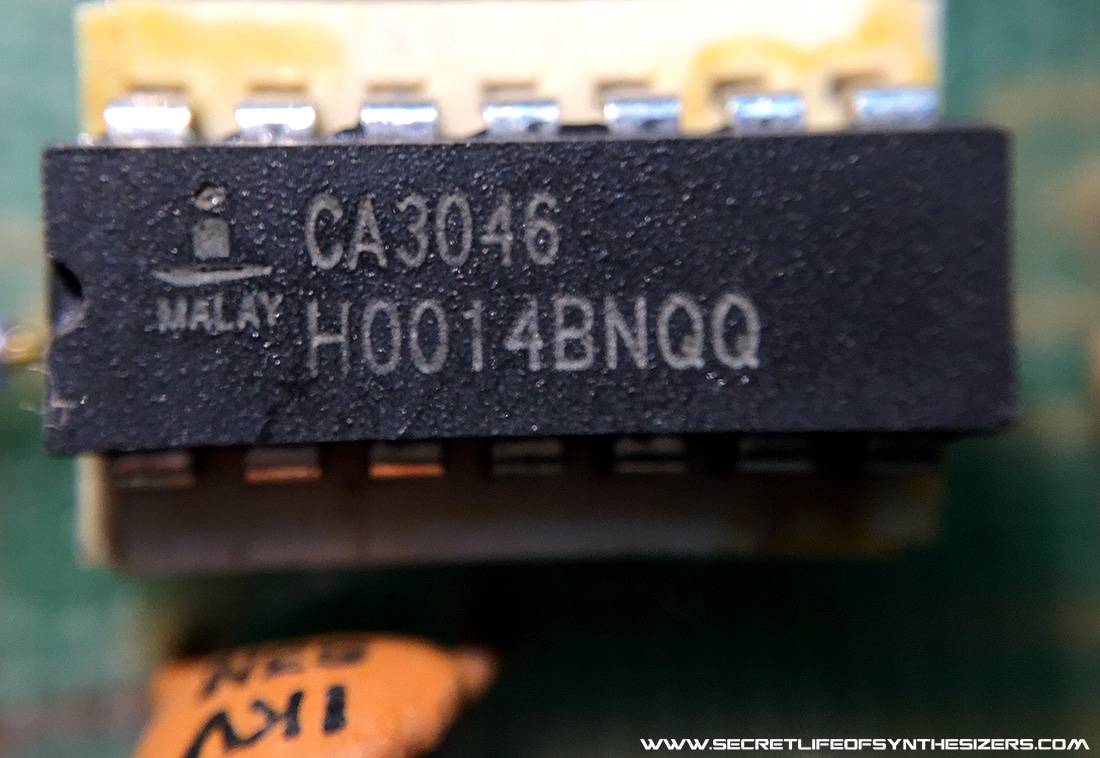 CA3046 transistor array inside a Minimoog 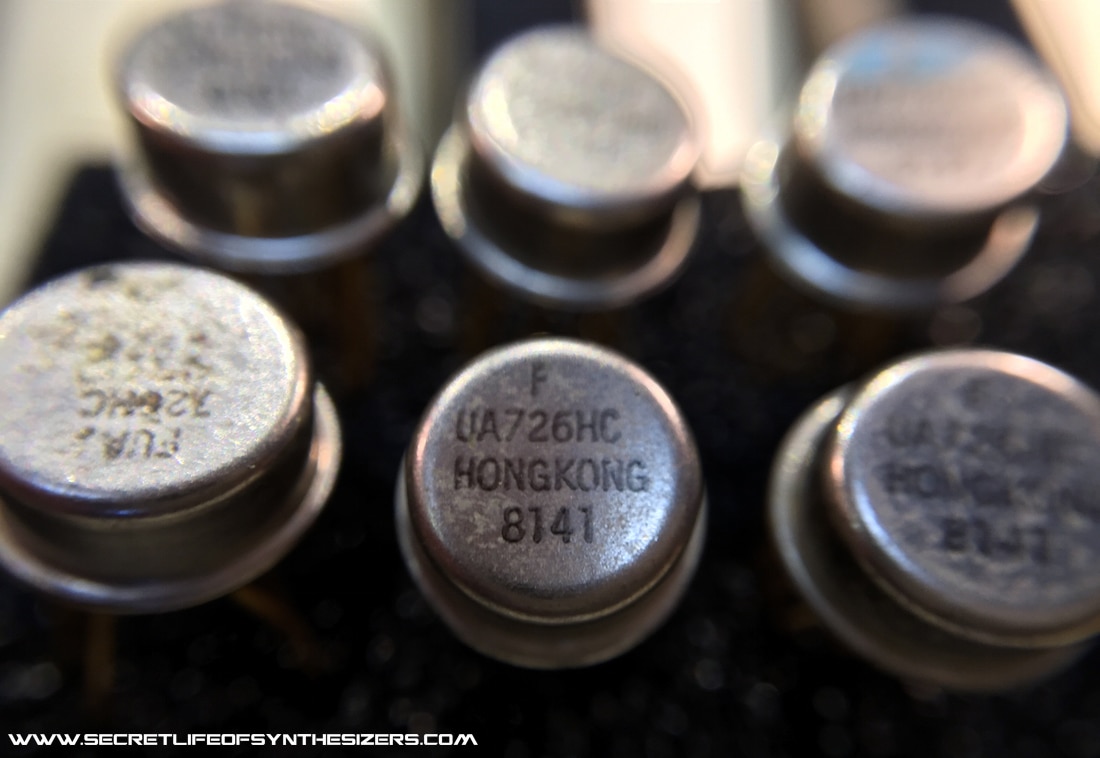 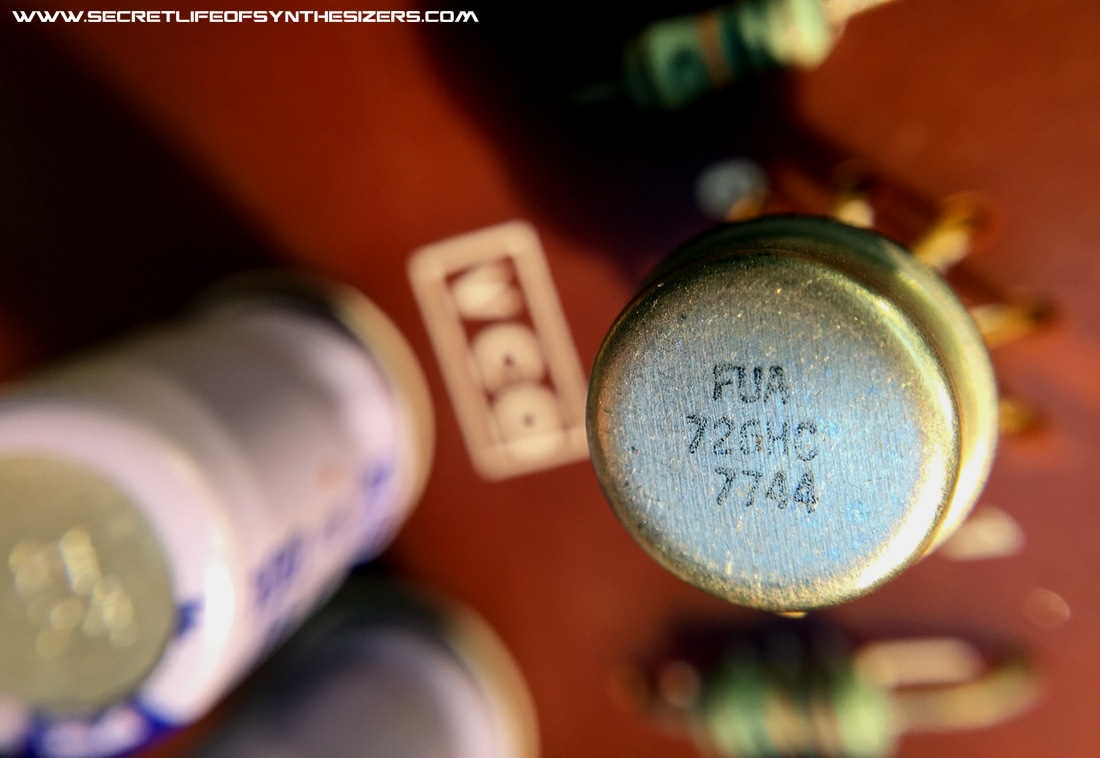 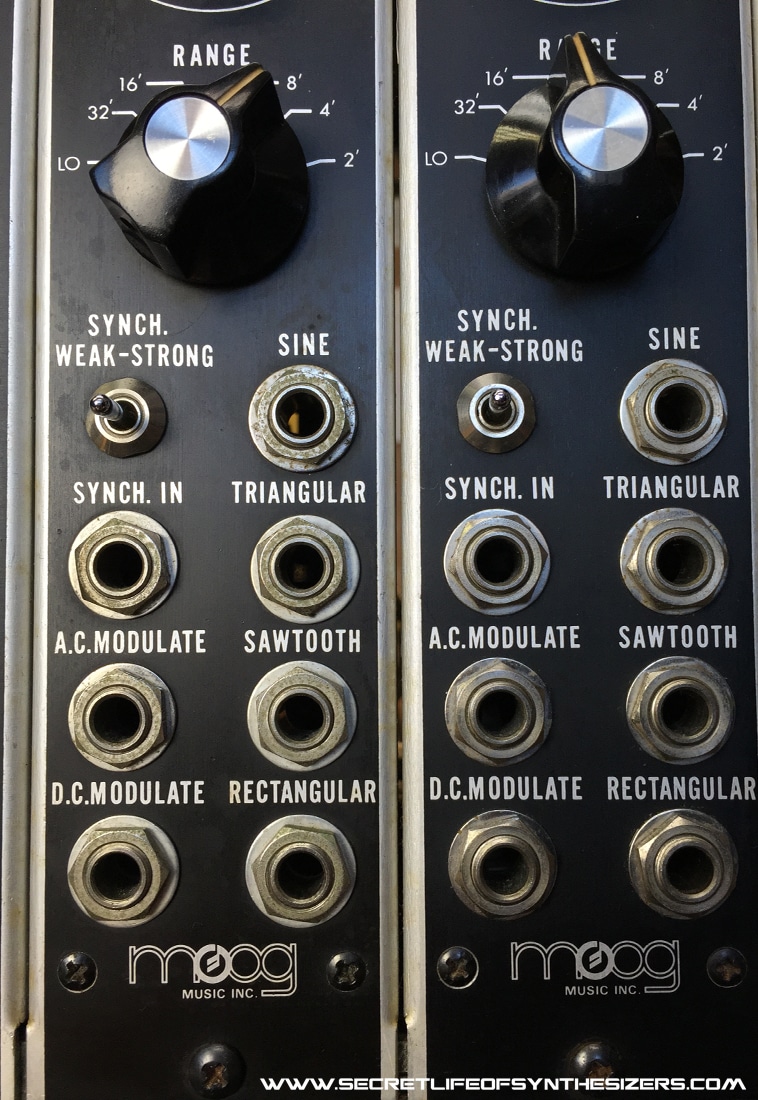 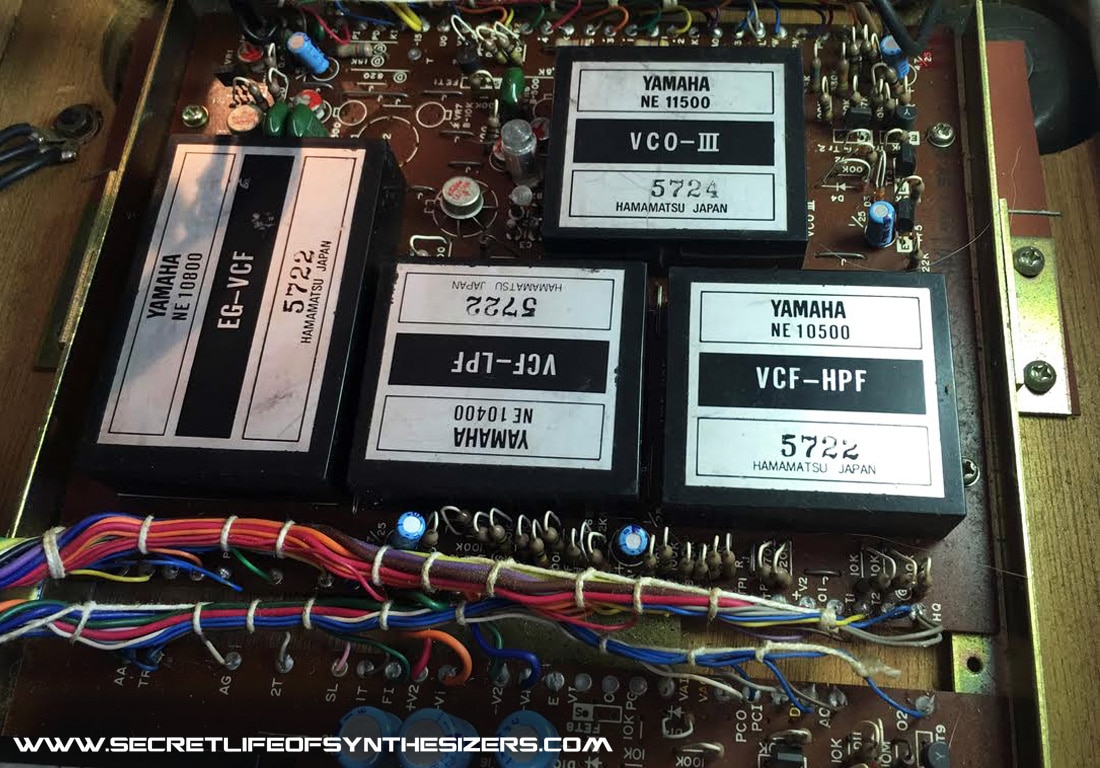 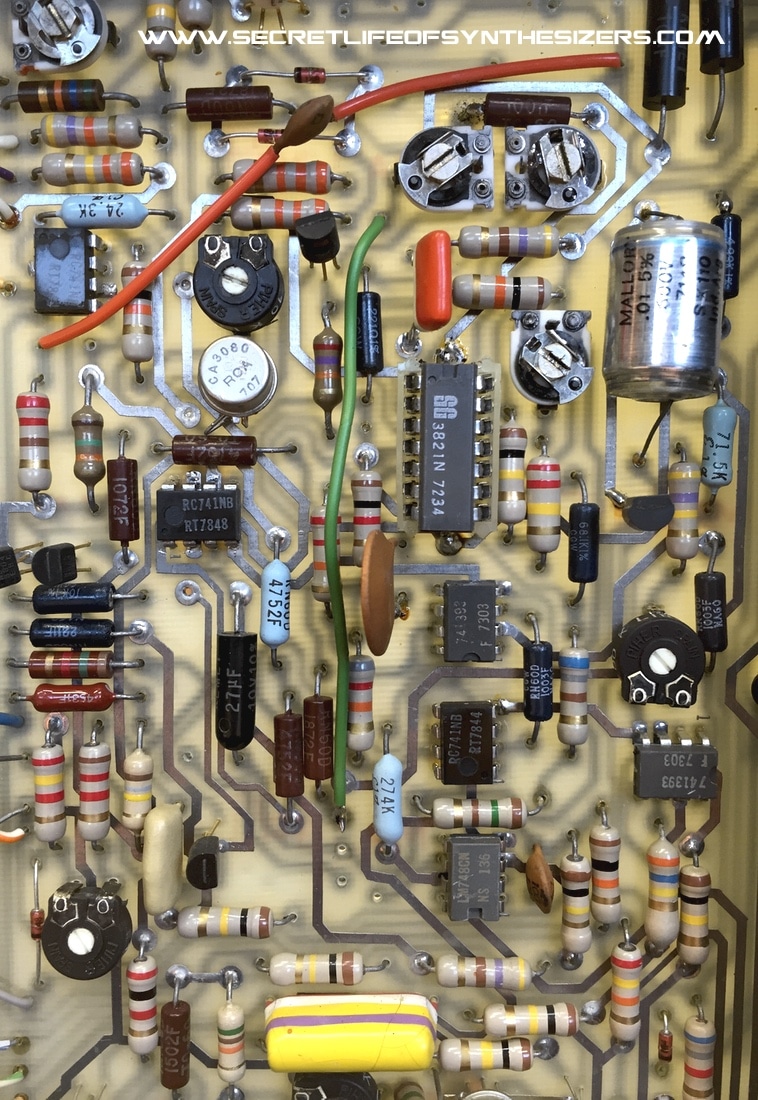 Inside a Moog modular VCO 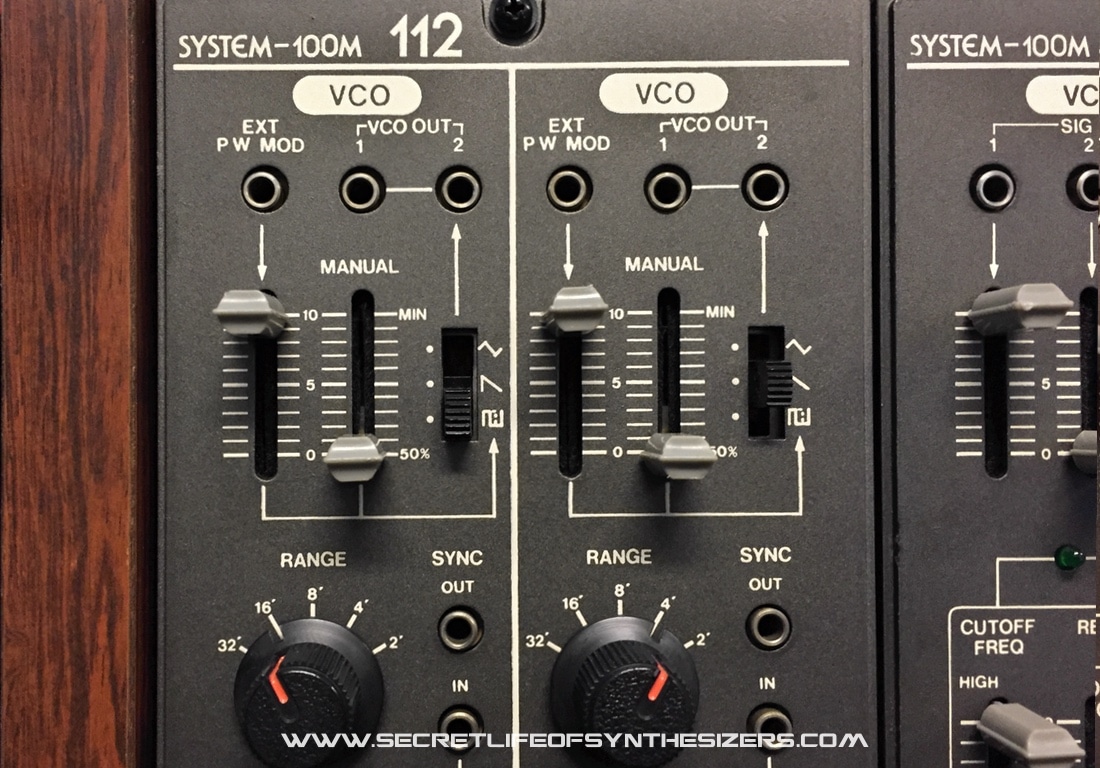 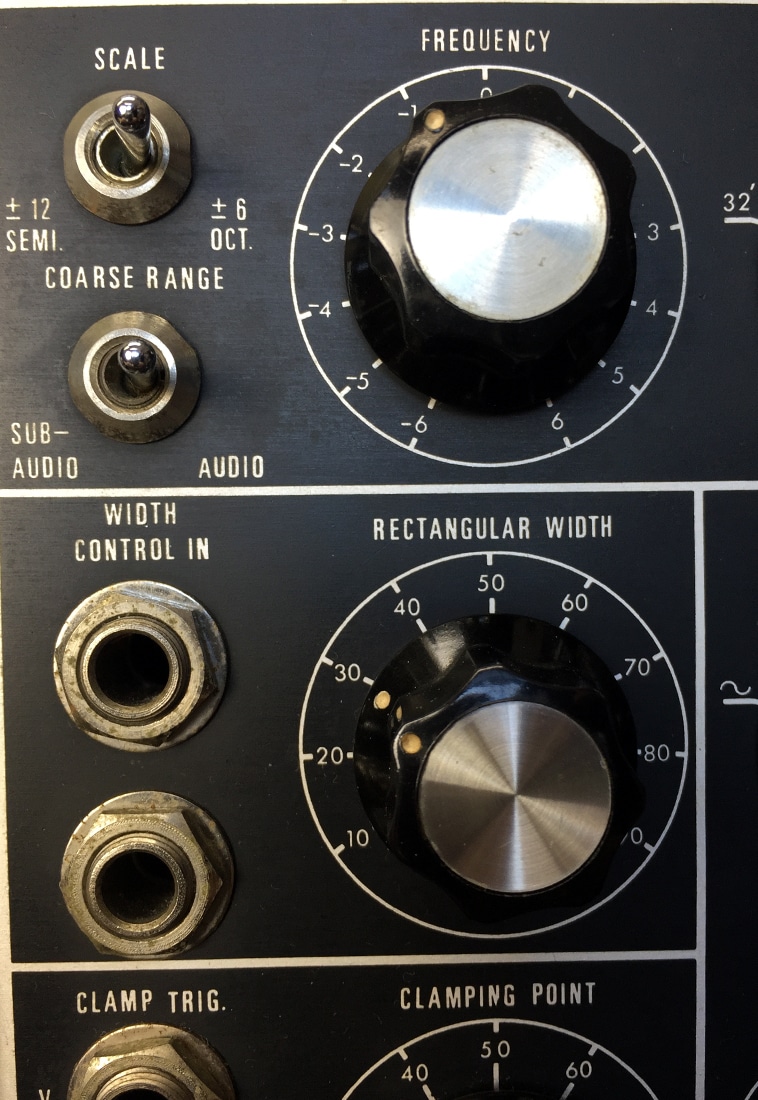 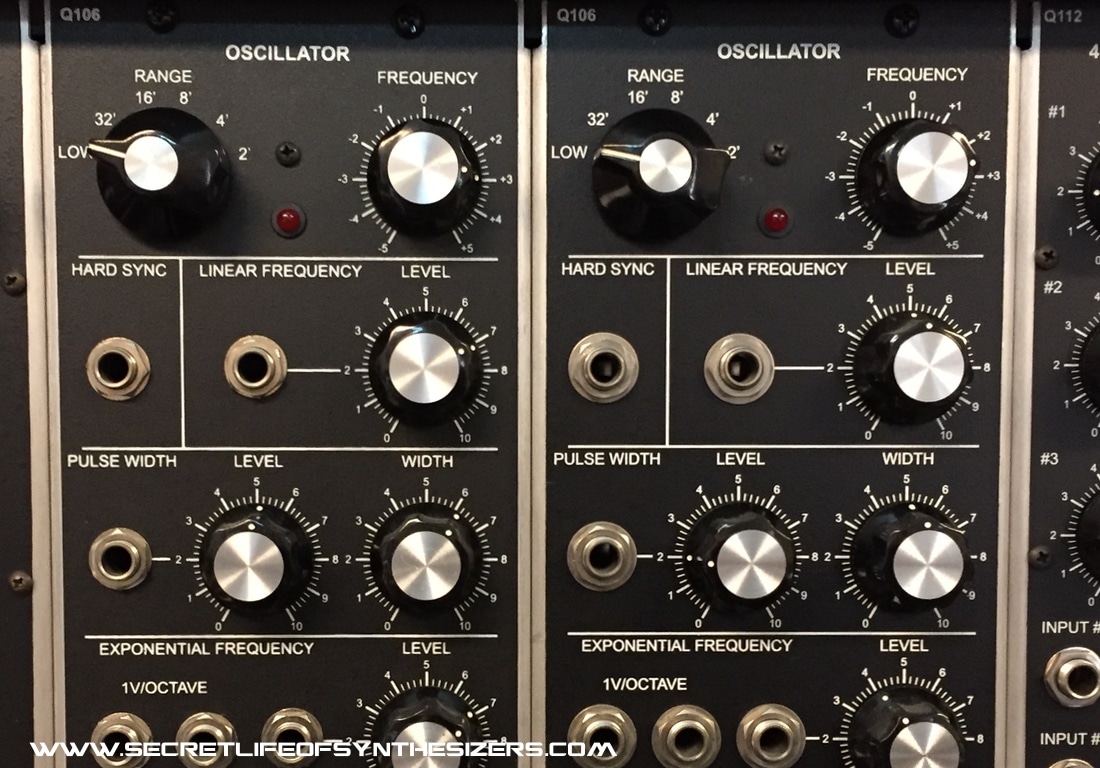